A “Chance” to Succeed - STAR Center

A “Chance” to Succeed 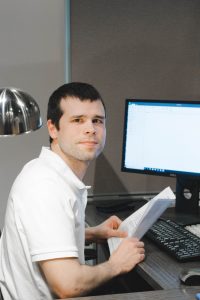 Chance was referred to STAR Center in May 2017. He came to STAR Center with a Bachelor’s Degree and was looking for a company to give him an opportunity to prove his customer service skills and willingness to help others. Chance’s disability effects his vision and balance but, his goal has always been to work in retail or customer service.

Chance completed STAR Center’s Basic Job Readiness Program and really enjoyed the classes; however, he still needed a little more coaching in order to present himself to an employer in a manner that would afford him the opportunity to prove his skills. Mario, STAR Center’s Job Readiness Coach, continued working with Chance a little longer until he became very familiar with and confident in his abilities.

Chance then began receiving Job Placement services at STAR Center and spent the remainder of 2017 and 2018 submitting countless applications and going to interviews to no avail. In January 2019, Chance saw a job for a customer service position with Jackson Energy Authority (JEA) and wanted to apply. Later that month, STAR Center received a call from JEA saying that the applied position had been filled, but they really wanted to find a way to work with Chance, and they felt they would be able to find him something in the near future.

While waiting to hear back from JEA, STAR Center asked a Vocational Rehabilitation Counselor with the State of Tennessee about making On-The-Job Training Funds available to JEA for Chance, which was quickly approved! After several emails and meetings, STAR Center staff met on March 12th, presented the program to Chance, and the agreement was signed. Chance started working on March 18th as a Customer Service Representative Trainee/Administrative Assistant, initially scanning documents into customer files.

Chance has now been with JEA for a few months and he is doing very well. Chance is learning tasks needed to become a Customer Service Window Clerk and has connected positively with customers and co-workers. STAR Center fully expects continued improvement and success!

Chance now has that opportunity to prove himself, and he is determined to be successful. Disabilities Should not Prevent Employment